Greeks in Central Europe between the 15th and 20th Century 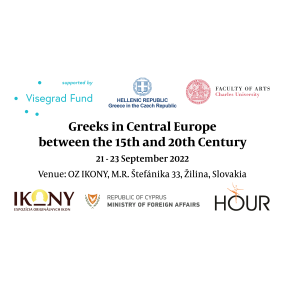 The project was put together by a team of experts comprised primarily of Modern Greek and Classical philologists and historians from the V4 countries, Serbia, Austria and Italy, with the aim of discussing the “Greek question” as comprehensively as possible in the appropriate historical and cultural context. One of its long-term objectives is to establish a research exchange network across Central European countries in order to share the results of the research and enable effective cooperation between academic and cultural centres.

A joint workshop held from 21st to 23rd September 2022 at the OZ IKONY Gallery Centre in Žilina, Slovakia, was the very first event, post 1989, at which experts in the field of post-Byzantine and Modern Greek studies from academic institutions of the V4 countries, Serbia, Austria and Italy will be able to exchange their experience and insights. The organisers had invited scholars to exchange information on the state of research in each country and draw up an initial outline of a future major joint international publication, teaching strategies and common research, and to inform the general public about the results of the research.

The main goal of the project is to develop and consolidate cooperation within the V4 and other countries and strengthen awareness of a common history in Central Europe.

The workshop programme with CVs and abstracts